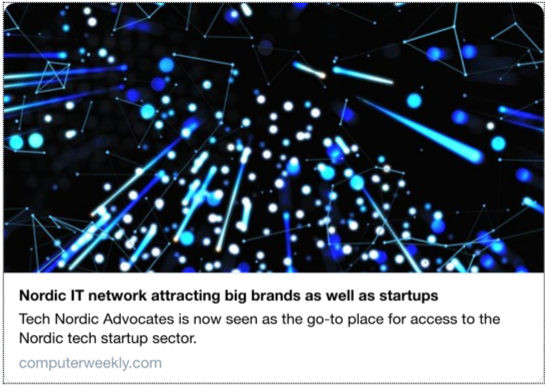 Tech Nordic Advocates (TNA) has seen accelerated development in its third year of operation, with large corporates looking to tap into its tech ecosystem in the region.

Set up in November 2015, TNA is a private network of individuals from startups, entrepreneurs, large IT firms and investors. It was designed to emulate Tech London Advocates (TLA), a similar private network of IT leaders, known as advocates, in London.

Three years in, TNA has about 700 advocates across the Nordic and Baltic countries, as well as the UK and China. These include professionals such as lawyers, accountants and consultants from startups, investors, corporates and service providers.

Tech startups in the network include Dappad, Logwise and Eucaps from Sweden; Aryze, Flexfunding and Cardlab in Denmark; Tillit and Investio in Norway; as well as companies from Lithuania and Estonia.

About 275 tech startups have enrolled in TNA, including those in the areas of financial technology (fintech), insurance technology (insurtech), creative tech, urban tech, blockchain, machine learning and artificial intelligence (AI).

TNA founder Jeanette Carlsson said: “They come to us now we have established credibility as the player that can provide access to the Nordic/Baltic ecosystem, rather than us having to chase them and justify why we’re chasing.”

It also serves as a gateway to other tech hubs as part of the Global Tech Advocates network, and recently launched a Nordic/China tech partnership.

Carlsson named getting funding as the biggest challenge the organisation faces. “There is so much appetite for what TNA does, but as a private sector-driven, not-for-profit network, there are limited funds,” she said.

One Nordic startup working with TNA is Sweden-based fintech Eucaps, which offers a trading platform. Founder Henrik Wagenius said his company received money from the Swedish government to join TNA.

It has been able to develop links with UK organisations through TNA. “It was great for us as an entry point to the UK because there are lots of investors there,” he said.